Yesterday was a nightmare day for numerous families after a helicopter crashed in Calabasas, California, killing nine people.

Two of the victims on board were NBA legend Kobe Bryant, and his 13-year old daughter, Gianna.

For most, yesterday was a sad day, and a day to reflect. For some, it was a chance to crack a joke, and that is exactly what comedian Tony Hinchcliffe did.

Tony hit Twitter shortly after the news of Kobe passing away, and he cracked a joke about Kobe passing, and how that can't be true.

Kobe passing? This can’t be true.

Well, Baltimore rapper King Los wasn't having it, and immediately called Tony out on his joke via social media. 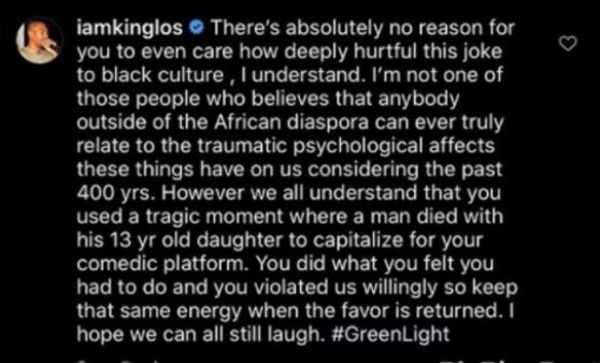 Tony responded via DM to tell Los if anything happens to him, he'll call the cops.

i respect freedom of speech but I also understand that the value of the black family will never fully resonate with oppressors children nor is it their responsibility to give a fuck. I’m a big comedy fan but this could only be funny to those who have zero empathy for the loss we took as a culture. @tonyhinchcliffe you violated and some will laugh but please understand the same thing that makes you laugh can be the thing that makes your family cry. I know you only see us as athletes and rappers but that was a great black father who just so happened to be a King in our community. This is what happens when we let people like Zimmerman live , our death becomes a joke in a struggling comedians failed attempt to be a #Cloutchaser please note: this is only a joke our enemies would make.

Ohhhh the Karma of good comedy ... see previous post !!!! @tonyhinchcliffe gathered that somehow I would be responsible for the retaliation of his inconsiderate behavior. No sir you “make fun of people for a living” , it’s in your job description. Keep the joke alive remember???? I never told anyone or perpetuated violence against nor did I threaten you. I challenged you and your thought process intellectually. You capitalized off of a grieving family and we ain’t laughing at that horrible joke. The nature of a coward , stand up y’all and take the public scrutiny like a man. If you’re hated bcuz of this it’s your fault. #Karma

Do you agree with King Los?