Rita Ora and Conor McGregor are not supposed to be "dating."

The singer is supposedly involved with Tyrone Wood, son of Rolling Stones legend Ronnie Wood, and Conor is in long-term relationship with the mother of his child Dee Devlin.

Which is why this Tweet Rita put out late last night from London's Fashion Awards is rubbing so many folks the wrong way. 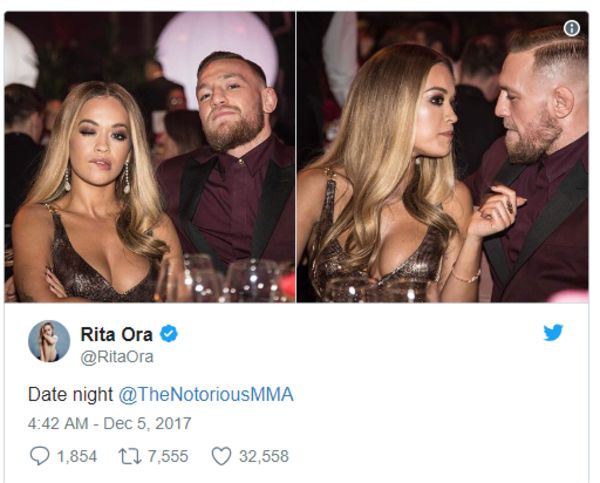 Rita has a history of joking about being the other woman. Last year, she seemingly played along with the rumors that she was the Becky With The Good Hair that JAY-Z cheated on Beyonce with before denying it was her.

Girl code around the world is literally screaming at Rita Ora, what a fucking tuna melt

Rita Ora was deffo Becky with the good hair Beyoncé was on about you know ... I can just smell it !

You've got a fine Irish steak at home mate. No need to ruin it with a McDonald's.

Rita Ora’s desperate attempts to stay relevant are actually quite sad 😂 imagine being that much ae a boot tho, hope Dee kicks her cunt in

The Rita Ora and Conor McGregor situation is prime example of how it’s nearly always the girl getting the blame and hate for it.. it takes two✌🏼

Rita Ora made a joke and the masses of insecure twitter girls go mad 🤣😂 you have no context of the joke or their relationships, you don’t even know these people. Sit down. pic.twitter.com/IzXagJqKfi

Was Rita out of line?