Teddy Bridgewater Calls Out NFL Players For Being Fake "Gangsta"

According to Bridgewater, most football players are not "gangsta" and he doesn't want kids to think you have to act that way to make it in sports. 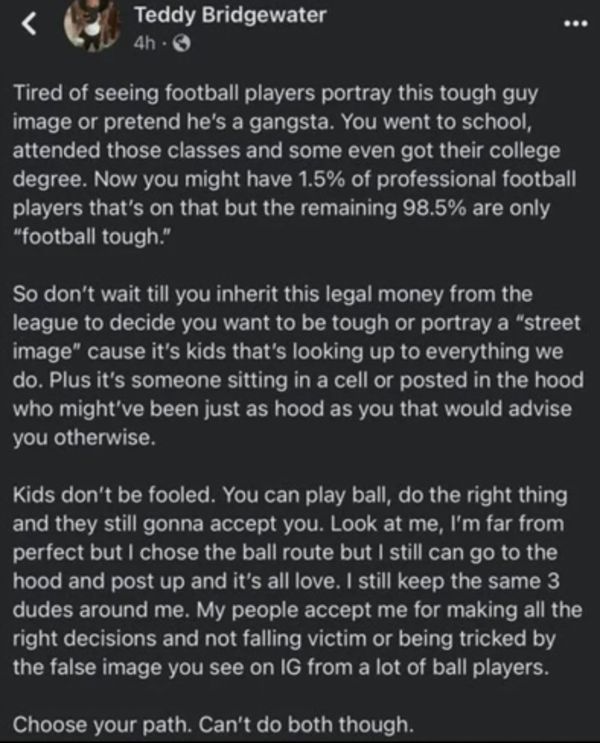 "Tired of seeing football players portray this tough guy image or pretend he's gangsta. You went to school, attended those classes, and some even got their college degree. Now you might have 1.5% of professional football that's on that but the remaining 98.5% are only "football tough."

"So, don't wait until you inherit this legal money from the league to decide you want to be tough or portray a 'street image' cause it's kids that's looking up to everything we do. Plus it's someone sitting in a cell or posted in the hood who might been just as hood as you that would advise you otherwise.

Kid's don't be fooled.  You can play ball, do the right thing and they still gonna accept you. Look at me. I'm far from perfect, but I chose the ball route but I still can go to the hood and post up and it's all love. I still keep the same 3 dudes around me. My people accept me for making all the right decisions and not falling victim or being tricked by the false image you see on IG from a lot of ball players. Chose your path.  Can't do both."

DeSean Jackson, Stefon Diggs, Micah Parsons, and Dalvin Cook were among those who agreed with Bridgewater's statement.

There has been a similar debate in the NBA, where Ja Morant has been called out for acting "gangsta" despite being a college boy from a nice two-parent home.

Report: Kevin Durant Planning to Retire If Not traded 14 hours ago / Sports Sports