A pre-"Gucci Gang" Lil Pump got himself some promo in April of 2017 for previewing a song called "Fuck J. Cole".

While one could argue there is no way to respond to such aggressive minimalism, J. Cole stunts his signature depth and takes a very wordy shot it at on 1985, the final track on his new album K.O.D.

All these niggas popping now is young
Everybody say the music that they make is dumb
I remember I was 18
Money, pussy, parties, I was on the same thing
You gotta give a boy a chance to grow some
Everybody talkin' like they know somethin' these days
Niggas actin' woke, but they broke, umm
I respect the struggle but you all frontin' these days
Man, they barely old enough to drive
To tell them what they should do, who the fuck am I?
I heard one of em' diss me, I'm surprised
I ain't trippin', listen good to my reply
Come here lil' man, let me talk with ya'
See if I can paint for you the larger picture
Congrats 'cause you made it out your mama's house
I hope you make enough to buy your mom a house
I see your watch icy and your whip foreign
I got some good advice, never quit tourin'
'Cause that's the way we eat here in this rap game
I'm fuckin' with your funky lil' rap name
I hear your music and I know that rap's changed
A bunch of folks would say that that's a bad thing
'Cause everything's commercial and it's pop now, Cole raps.

And that's the difference between J. Cole and Lil Pump.

Although here's another perspective: 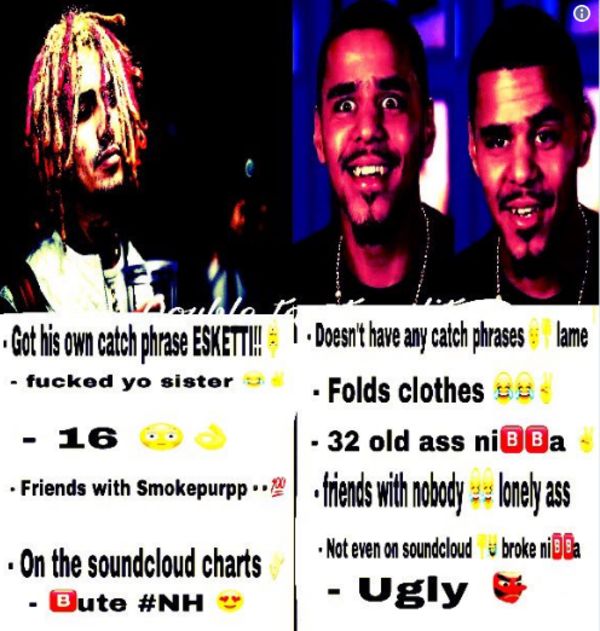 Young Scooter Gets At N.O.R.E. For Saying Future Is Mad At Drake a week ago / Beef Beef