Things are starting to heat up between Donald Trump and Kanye West.

The former President posted on Truth Social on Friday, and detailed the dinner he had with Kanye and three guests on Tuesdy evening.

Trump claims he was not told bout the guests, and that he did not know them.

The guests included white supremacist Nick Fuentes, Karen Giorno and another unidentified man, according to CNN.

“This past week, Kanye West called me to have dinner at Mar-a-Lago. Shortly thereafter, he unexpectedly showed up with three of his friends, whom I knew nothing about. We had dinner on Tuesday evening with many members present on the back patio. The dinner was quick and uneventful. They then left for the airport.

Ye, formerly known as Kanye West, was asking me for advice concerning some of his difficulties, in particular having to do with his business. We also discussed, to a lesser extent, politics, where I told him he should definitely not run for President, ‘any voters you may have should vote for TRUMP.’ Anyway, we got along great, he expressed no anti-Semitism, & I appreciated all of the nice things he said about me on ‘Tucker Carlson.’ Why wouldn’t I agree to meet? Also, I didn’t know Nick Fuentes.”

These posts came after Kanye said that Trump yelled at him, and insulted Kim Kardashian.

According to Ye, Trump told him not to run for President because he would lose. 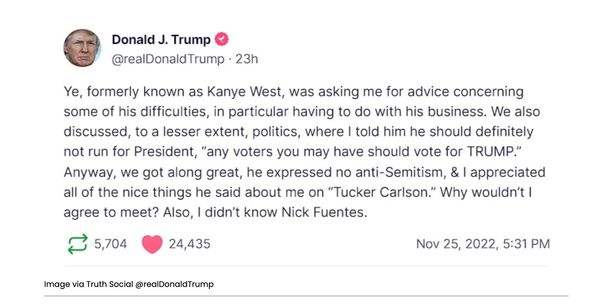