Twitter is trying to cancel Doja Cat after the upstart was caught hanging out in an Incel video chat and allegedly laughing at the other participant's racist jokes.

Doja, who's mixed race, was in news yesterday for mocking Lana Del Rey after Lana was accused of racism because she called out Doja, Beyonce, Nicki Minaj, and others in a rant about music industry double standards.

Now the shoe is on the other foot and Doja is trending on Twitter for all the wrong reasons.

Video proof of Doja Cat being on Tinychat with incels pic.twitter.com/vKZuMdIcq5

doja cat after getting off to a bunch of incels calling her the hard r #dojacatisoverparty pic.twitter.com/ss5zCnrt8q

everyone is going to cancel Doja rn then immediately go back to listening to her music like nothing happened because "cancel culture" isn't real and twitter is just full of a bunch of fake wokes tweeting for clout #dojacatisoverparty pic.twitter.com/46N1h8y0qx

lana del ray and her fandom doing a ritual so doja cat would get cancelled literally the DAY AFTER HER #dojacatisoverparty pic.twitter.com/CAcPlOIaAm

Doja and her friends when they saw all the black BARBZ supporting her music and making them number 1 #dojacatisoverparty pic.twitter.com/msb3sl6gQi

#dojacatisoverparty is trending bc she was on a video chat site talking to racists and laughing to their racist jokes, she even talked abt not wanting to be black but at least she’s thick, has a song called dindu nothin which means (a phrase that mocks police brutality victims) pic.twitter.com/16A4bs0A58

We can't find any evidence of Doja actually laughing at racist jokes, and it's entirely possible she's trolling.

But there does seem to an abundance of evidence Doja likes some unusual company. 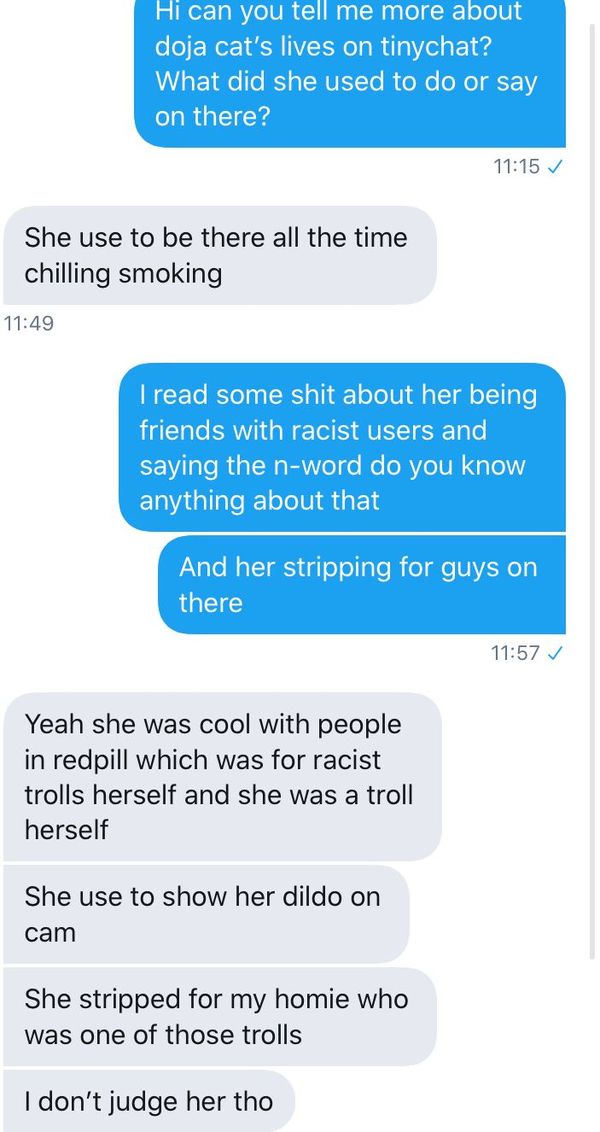 #DojaCat is the trending topic today after she was caught on tiny chat saying she wish she wasn’t black.... thoughts?! (Swipe left)