Tekashi 6ix9ine is out of federal prison and has been busy dropping new music, as well as trolling everyone online.

Unfortunately for his old crew, they aren't doing the same, as they are all locked up in federal prison with the help of Tekashi's testimony.

Shotti, one of the leaders of the Nine Trey Gangsters and former manager of Tekashi is still locked up, but it doesn't seem to be getting him down.

In a recent picture posted from behind the walls, it shows Shotti with a group of men he is locked up with, and on the caption, it reads the infamous saying, "WE DON'T BREAK WE DON'T BEND WE DON'T FOLD."

DJ Akademiks re-posted the photo, and of course, Tekashi had to stop by to troll a bit more.

New photo of #shotti behind bars gets posted .He still repping his slogan “we don’t bend.. we don’t fold.. it’s ....” 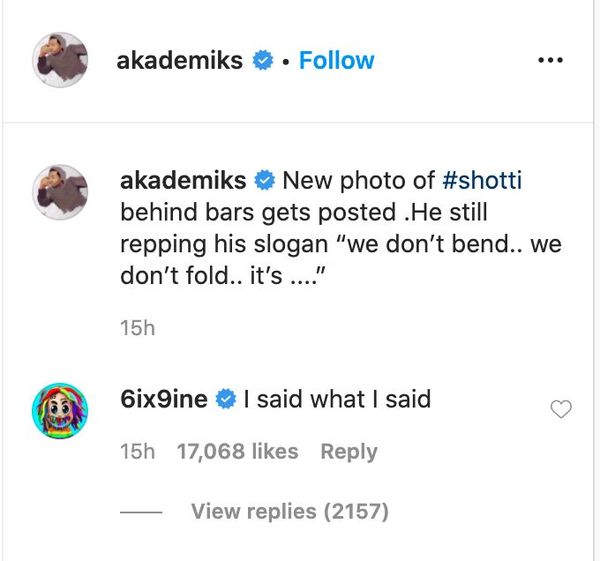 That could be a reference to his snitching, or to The Breakfast Club interview he did right before he was locked up, during which he trashed Shotti and the rest of the Tr3yways as a bunch of broke gangsters sleeping in their mom's basement.

Swae Lee Wants To Chop Down Lizzo a week ago / News