The Game got a crowd in Europe to chant "Fuck 69" and "Fake ass Blood" at a show over the weekend.

He followed that up with IG posts mocking a pre-fame 69's outfit and denying him his claim on being "The King Of New York." He also accused 69 of "tryna turn red rags into Disneyland tickets."

This the bum y’all let call himself the king of New York ??? 😂😂😂 Frank White only KING OF NY... This really the nigga running round talkin bout he been a blood his whole life ?? This really the 🤡 niggas running round throwing up blood wit ??? This lil weirdo... Foh nigga.... If you don’t take that red rag off playing wit real niggas lives & get yo dick in the booty Carlton sweater around the neck wearin ass on somewhere & stop playing wit this blood shit before somebody hurt yo mamas only daughter. You a nice guy, look at that smile...cut the tuff shit out before it’s too late. Sweater tied around ya neck 😂😂😂 ALL BOYS SCHOOL head aaaahhh LOL..... we know what the 69 stand for.... you used to suck wee wee’s while gettin ya pussy licked at ya private school #nIaintgotnoalbumcomingout #thisfordisrespectingmyflagnmycity #554 #wegoneseewheretheprotectionwhenthatlilmoneyrunlow 🎮

Now, I wasn’t gone say shit else to this buster ass phony cuz I’m way beyond this peon but he disrespected my city & a rag I put in my pocket, lost countless homies, relatives & my own brother over. A Color & way of life I almost died over... Its niggas all over the world who take this blood shit serious & they are not gone be playing these games when they catch you.... This right here takes the mothafuckin cake tho !!!! “BLUE BANDANA BEDSPREAD” now you the king of NY bloods.. I’m fuckin crying homie 😭😭😭😭 The 9trey niggas I know from NY can’t be cosign’n this 🤡 !!! Foreal homie ???? 😂😂😂😂 this is the BIG BLOOD KING OF NEW YORK ???? Stop it 5... just cut all the shenanigans & jokes & just be the nice boy you are inside Daniel. Pretending gone get you hurt kid. It’s REAL NIGGAS out here dying over what you playing around wit. All you kids following this dummy need to know he playing wit y’all lives too.... tryna turn red rags into Disneyland tickets... This ain’t for you... you confused ass lil retard... real niggas on ya head worldwide cuz you out here fakin the phonk... I pulled ya hoe card... don’t make me split the deck #Teryaki69 aka #Rainbowbrite #TheDiaperSniper

69 responded to Game's initial comments with a series of mocking posts, in which he says he's turning "gangsters" into clout chasers.

SUCK MY DICK. I literally come to everyone city when y'all say don't come. Pullin everybody card.. y'all stay in y'all hometown I TALK SHIT FROM NEW YORK ALL THE WAY TO YA CITY. I move around.

When u was 21 u was crying over a bitch. I BEEN GANGBANGIN AS A YOUNGIN. U worked out and got "tuff" and turned blood. LOL "I had the most fun in my life" headass 😭😂🤣🤣

69's big homie, the CEO of #treywayent, also informed Game that 69 can't be touched and mocked the 38-year old for crying on The Love Connection back in the day.


He also had harsh words for the Prince family, who had 69 missing shows and deleting IG posts this weekend.

#tekashi69 big homie and ceo of #trewayent ain’t letting ppl bully #tekashi69 and says he has the best protection in the world. Are ppl tryna bully Tekashi cuz of how he looks or did he cause this all himself??

Do you think there will be problems between The Game and 69 when Game returns to the United States from his European tour? 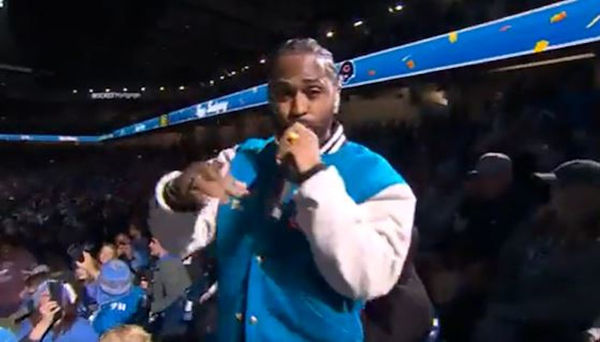