We have another study ranking the "lyrical intelligence" of songs. This one puts the track's lyrics into Readability-score.com, which uses multiple methods to determine the grade level of any text.

To be eligible for the study, a song had to have spent at least three weeks atop the Billboard charts for Pop, Country, Rock or R&B/Hip-Hop between 2005 and 2014.

You can see all of the results here, but here are two big takeaways:

R&B/Hip Hop scores lowest among the four major genres, with its average hit song reading at a 2.6 grade level. Although it's not like the other genres are brain surgeons: Country hits read at a 3.3 grade level, and pop and rock hits each read at a 2.9.

Eminem tops R&B/Hip Hip artists who meet the criteria with a 3.7 grade reading level. (In fact, Shady has the highest artist score of anyone besides Carrie Underwood and his old friend Mariah Carey.)

Even though Kanye West puts lots of words into his songs, and fashions himself quite the intellectual, his lyrics are not very complicated and read at a fairly low grade level. 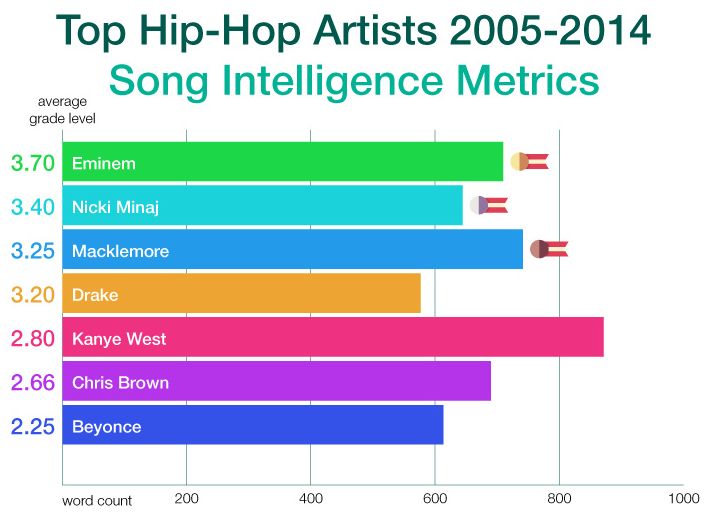 We wouldn't put too much stock into this. (Again, check the study for caveats.) But we have noticed a stunning simplicity to some of Beyonce's songs.