It's been almost two years since Chris Brown and Karrueche Tran broke up after the R&B singer fathered a love-child with another women.  But it seems like he still has feelings for her.

Either that or he just doesn't want anyone else to compliment her. Just ask Soulja Boy, who claims Brown threatened him after he liked a photo of Tran sitting on a balcony in a two -piece bikini.

This is what got #ChrisBrown heated #Roommates! #SouljaBoy

Soulja then told the "Loyal" singer to "pull up" and accused him of using too much of the white powdery stuff.

Oop! It's the second day of the new year! #SouljaBoy #ChrisBrown

Plus, he's been getting clowned left and right ever since telling that wild story about killing a home intruder.

Brown responded to SB's provocations by calling him an attention whore and a snitch.

He also denied contacting Soulja about his Karrueche comment. 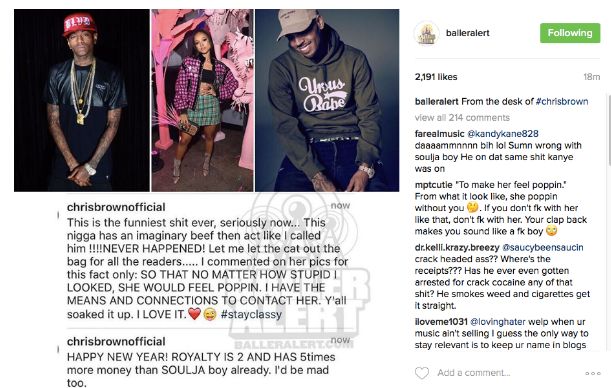 For his part, Soulja Boy mocked Brown for beating up Rihanna, and questioned his gang credentials.

How do you want this to end?

Update: Brown claims Soulja tried to apologize, but he's not having it.

This the message Soulja Fraud sent to #chrisbrown phone.... Soulja did the same thing to quavo, yachty and even me SMH.

Now they are going to box, and release each other phone #'s.

50 Cent Mocks Baby Mama Daphne Joy For Hanging With Puff Daddy; She Claps Back a week ago / Beef Beef