Chicago rappers RondoNumbaNine and Cdai were sentenced to 39 years in prison for the 2013 murder of livery driver Javan Boyd.

Cdai has long suggested that another Chicago rapper, Tay 600, snitched on them.

However, Vlad TV has unearthed the paperwork from the trial, and it shows that Tay 600 was with the rappers at a party before the incident, but never spoke to investigators about it.

It also shows that Rondo (Clint Massey's) legal team tried to make clear that Cdai was the sole shooter in the incident.

When Rondo caught wind of this, he threatened to sue Vlad for character assassination. 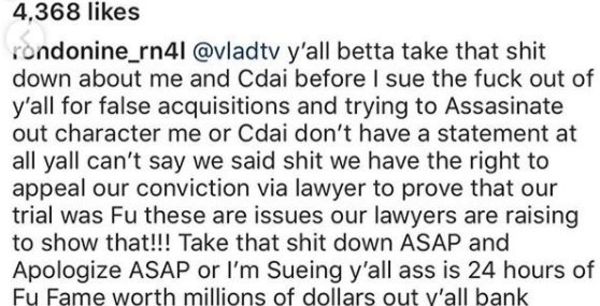 Vlad responded by displaying the paperwork for all to see.

Since @rondonine_rn4l wants to accuse us of trying to “assassinate his character” when we posted an article about him naming Cdai as the sole shooter, here is the excerpt from his actual appeal. If you look at the blue highlighted sentence, it clearly states: “on appeal, Massey (aka RondoNumba9) argues that his counsel was ineffective for not more vigorously pursuing a defense theory that Ealy (aka Cdai) was the sole shooter”. We stand behind our article.

Does having your lawyer push to establish the other guy was the shooter make you a snitch?