Rihanna Getting Some Heat For "Hood" Martin Luther King Image

Rihanna recently switched up her Twitter page header to an image of Martin Luther King with a gold teeth and icy earrings. 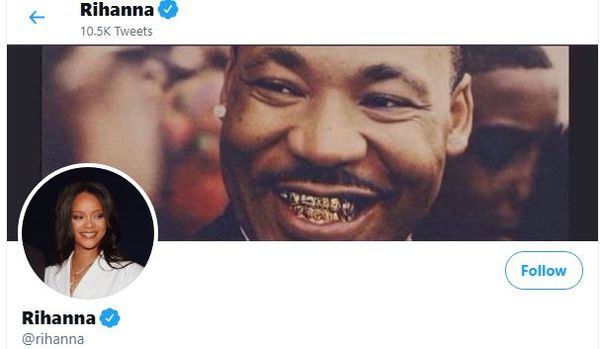 Some folks are saying Rihanna disrespected the civil rights legend by photoshopping him like a rapper.

So this is on @rihanna Twitter page. A photoshopped image of MLK with gold teeth in his mouth and a diamond earring. These foreigners have no respect for our culture. I will say for the 1000th time they will use a foreigner in a film to play a bisexual MLK. pic.twitter.com/9WrNGXKUnX

@rihanna why do you have a picture of #MLK with gold teeth in his mouth up? That's very disrespectful.

Whats up with the MLK background - gold fronts & earrings??? During BHM, really??? Take that down! Smh

While quite a few people have Tweeted that they are offended, none of these Tweets have many likes.

So far Rihanna has caught more heat from Hindus for wearing a diamond-studded pendant with the Hindu god Ganesha while topless than she has for photoshopping King.

Is that simply because the MLK image wasn't offensive?