The OVO goons are at it again.

Pusha T's show tonight in Toronto was shut down after multiple men ran up onstage in an attempt to get at Push. Here's video and some Twitter accounts of what happened.

someone tried to attack pusha and there was a brawl after... he came back eventually to perform “don’t like” and take subliminal shots at drake, but the cops were called and the show had to be cancelled... pic.twitter.com/ogyiBL2MDp

I’ll give you what I saw. Pusha was singing a song and right on the bar where he says something about getting wet/soaked or something along those lines about 10 mans threw water at him. Ruined it for everyone.

3 guys rushed the stage and tried to jump Pusha T. Pusha's boys quickly stopped and beat those guys down and then as the guys who were trying to rush Pusha ran away got beat by the crowd as well. 10 mins later cops came and stopped the show.

Last month, Pusha T bragged about selling out the 1500 seat Danforth Music Hall in Drake's hometown. It looks like some of those who bought tickets did so for the wrong reasons.

#PressPlay: #TSRUpdatez: Update: #PushaT exclusively told #TheShadeRoom he was untouched in the altercation and continued to perform after they cleared the stage ______________ Fans at the #PushaT’s show say some guys threw beer at him and then hopped on stage and tried to attack Push but he wasn’t hurt. Push went on to perform a few more songs then police ended up shutting down the show following the fight Via @ooamys 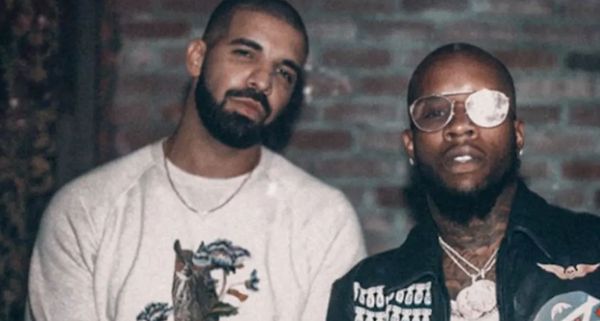