Nick Cannon is often criticized for his crazy fashion choices, not so much for what he says.

But that changed after comments he made during an interview with Professor Griff that have just hit the Internet.  In them, he says disparaging things about white people and Jewish people.

Nick Cannon says white people are "a little less," "closer to animals," "the true savages," "acting out of a deficiency so the only way they can act is evil." When does he get canceled? pic.twitter.com/vK3TBDW9i8

In the Interview, he also advanced conspiracy theories about Jewish people.

Cannon was ripped for his comments afterward.

I honestly cannot believe that people think this is ok. I don’t care what the context is. I would never make that claim about any race...that they are barbaric or evil based on race. Disgusting.


God, this generation is doomed. pic.twitter.com/ZJNlwujzz6


I remember the first time I got high, too.


Cannon has taken responsibility for the anti-Semitic part of the interview. 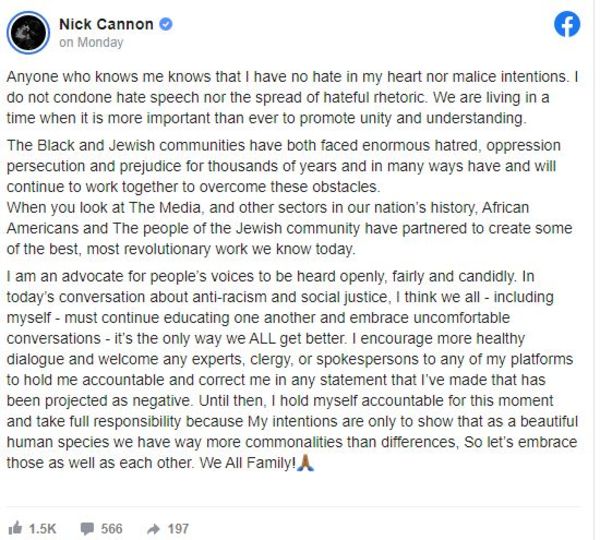 Update: Cannon has been fired from  Wild ‘N Out  by ViacomCBS

ViacomCBS condemns bigotry of any kind and we categorically denounce all forms of anti-Semitism.

We have spoken with Nick Cannon about an episode of his podcast “Cannon’s Class” on YouTube, which promoted hateful speech and spread anti-Semitic conspiracy theories.

While we support ongoing education and dialogue in the fight against bigotry, we are deeply troubled that Nick has failed to acknowledge or apologize for perpetuating anti-Semitism, and we are terminating our relationship with him.

We are committed to doing better in our response to incidents of anti-Semitism, racism, and bigotry. ViacomCBS will have further announcements on our efforts to combat hate of all kinds.