You don't want to get in a stan war with NBA YoungBoy, who's a modern-day Eminem when it comes to a dedicated fan base.

Yak jumped on Twitter last night and admitted he's been feeling the heat from the YoungBoy army.  So much so, that he's leaving social. 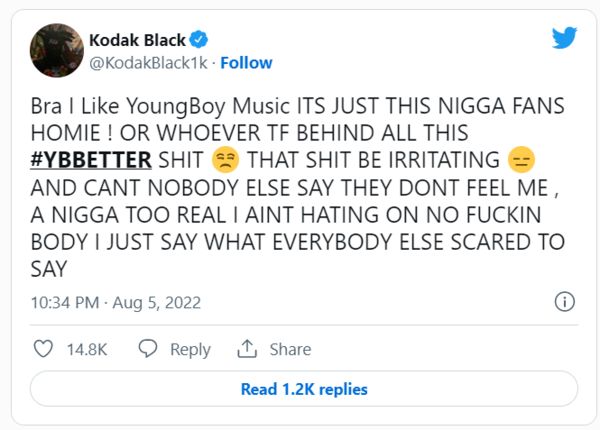 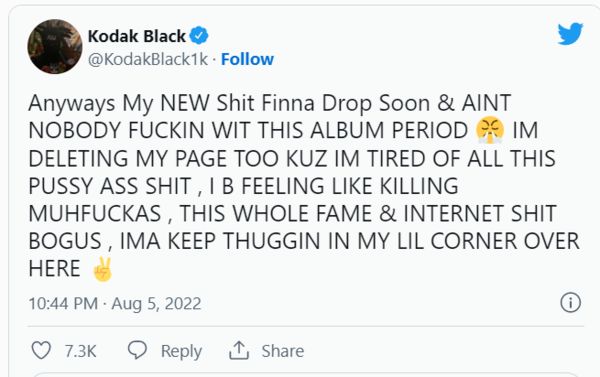 "Bra I Like YoungBoy Music ITS JUST THIS N*GGA FANS HOMIE ! OR WHOEVER TF BEHIND ALL THIS #YBBETTER SH*T  THAT SH*T BE IRRITATING  AND CANT NOBODY ELSE SAY THEY DONT FEEL ME , A N*GGA TOO REAL I AINT HATING ON NO F*CKIN BODY I JUST SAY WHAT EVERYBODY ELSE SCARED TO SAY," Kodak typed. "N*gga Can’t Even Post A Cheeseburger Without They Ass Under A Post Talm Bout “YB Post His Burger Better”  I Love It That’s Kool But The Sh*t B Irritating Af Homie , Y’all Stay On Dat N*gga Page Wit Dat Sh*t. Anyways My NEW Sh*t Finna Drop Soon & AINT NOBODY F*CKIN WIT THIS ALBUM PERIOD  IM DELETING MY PAGE TOO KUZ IM TIRED OF ALL THIS PUSSY ASS SH*T , I B FEELING LIKE KILLING MUHFUCKAS , THIS WHOLE FAME & INTERNET SH*T BOGUS , IMA KEEP THUGGIN IN MY LIL CORNER OVER HERE."