NBA YoungBoy caught a huge break a few months back when a judge terminated his probation and house arrest early because of good behavior.

However, the Baton Rouge rapper is still a convicted felon with a ten year suspended sentence for being a trigger man in a  2016 failed drive-by shooting in his hometown.  Convicted felons shouldn't have guns and WBRZ Channel 2 in Baton Rouge is reporting YoungBoy may be in trouble for handling a firearm during a video shoot for his new track "Bad Bad" which he filmed with his 17-year old brother Jeffery Tate, who was recently arrested for his involvement in a murder. 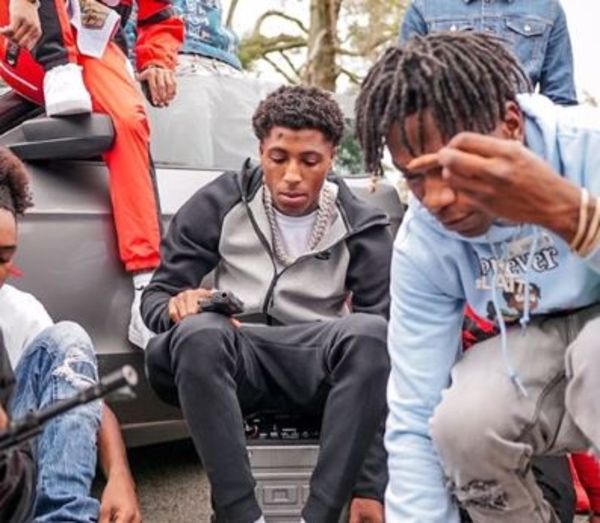 The station reached out to East Baton Rouge District Attorney Hillar Moore, who told them that Tate is in the clear because he hasn't been convicted of anything yet but YoungBoy is a different story.

YoungBoy better hope his lawyers can continue to work their high-paid magic.  (Or that they are Migos-style fake guns in the video.)

STORY VIA WBRZ - The recent production of a music video featuring local rapper, NBA YoungBoy caused some concern among when the rapper was spotted handling objects that appeared to be weapons during the shooting of the video. But #nbaYoungBoy wasn't the only one handling the questionable items during the filming. The 20-year-old rapper, known for being arrested on two counts of attempted murder, assault, and weapons violations was shooting a video in Baton Rouge alongside his 17-year-old relative, Jeffery Tate. During the filming, Tate was also handling items that appeared to be weapons. Tate happens to be one of three teens authorities have recently tied to the murder of a 17-year-old who was shot while walking home in December of 2019. WBRZ asked East Baton Rouge District Attorney, Hillar Moore whether it was admissible for YoungBoy, a convicted felon, and Tate, a suspect in a murder, to use objects that appeared to be weapons in the recent music video. Moore's response was, "Nothing will be done to Tate because he is not a convicted felon, nor is he under bond obligation." But, YoungBoy's case may be different. As a convicted felon, the rapper may face charges for possession of a firearm.

Puff Daddy & The Notorious B.I.G. Were On New Drug When They Shot 'Hypnotize' Video 5 days ago / News News