Dr. Dre worked on Kokane's debut album, 1991's Addictive Hip Hop Muzick.  (Kodane was rapping under the alias "Who Am I" back then.)

According to Kokane's IG page, Dre wanted to flip Michael Jackson's mega-hit "Billie Jean" for the project.  However, Dre balked at the price he would have to pay for the sample.

Hip hop history... . When I first got signed to ruthless records , EAZY E ask me the question? “He said Kokane , who would u like to produce your album”... my reply: “I would love for hutch & Dre to do the album”... . Hutch already gave me 3 songs , which landed me the deal at Ruthless Records, thru Law house production. . In 1990 , @drdre RE-FLIPPED MICHAEL JACKSON’s “BILLY JEAN” for Kokane’s upcoming album “WHO AM I” , which was on EPIC RECORDS at time - #labelmates... . ruthless records tried to get Michael to clear the record... Michael replied to dr Dre & ruthless & said: “I heard about the new artist Kokane signing to EPIC RECORDS, & then said , Dr Dre can use the song for my project, if dr Dre would produced 6 beats for his projects, with NO PUBLISHING” though ; (Michael was Gansta wit it) 🤣 . Dre & EAZY obviously turned it down... so that lead hutch to Do the full production on Kokane’s “Who am I” album. Dre was comfortable with putting me on the niggaz for life album instead.... . ‘91 is when my “WHO AM I” & the NWA project was released. . Even though Dre left ruthless at the end of ‘91 - going in to ‘92, I still managed to get on the “Deep cover” sound track remixed by dr dre.... years later , we reconnected in 2000 for the chronic 2 album... . My book drops in 2021 “The mak-king of a Legend” by Jerry B Long jr ..... Rest In Peace Eric & Michael

"ruthless records tried to get Michael to clear the record... Michael replied to dr Dre & ruthless & said: “I heard about the new artist Kokane signing to EPIC RECORDS, & then said , Dr Dre can use the song for my project, if dr Dre would produced 6 beats for his projects, with NO PUBLISHING” though ; (Michael was Gansta wit it)"

There were perhaps some lingering bad feelings about the negotiations because in 2000 The Good Doctor turned down producing what would have been MJ's first album in almost a decade.

"Somebody approached me about working with Michael Jackson, and I did say no because I like working with new artists or people that I've worked with in the past," Dre said in 2000. "I can develop them from the ground up. There's no set standard that I have to live up to or anything like that. All I have to do is go in the studio, and basically they're going to bust their ass to come in there and do their thing the way it's supposed to be done."

Would you have liked to have heard MJ on some Dre beats? 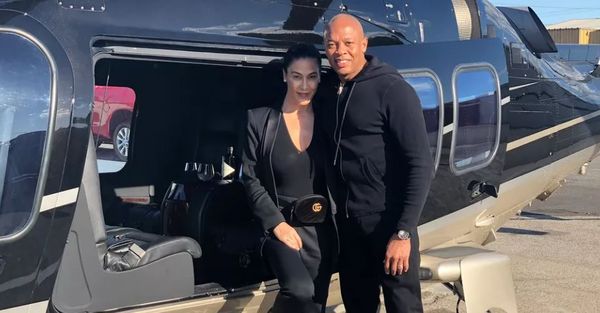 Dr. Dre's Wife Claims Dre Ripped Up Their Prenup before Divorce a day ago / News News