For a while, it looked like she was going to sign with Meek Mill. But that didn't happen, and she ended up under Tory Lanez's One Umbrella imprint.

When Tory celebrated Melii's debut on Instagram, Meek got salty.

@melii I’m so proud of you ! Watched u grind your way through everything .. when people tried to play you , you kept your head strong and focused ! I’m happy that you dropped your first real project today #Phases ... and I’m also PROUD AF to announce and say that your part of our team !!!! Welcome to #OneUmbrella ☔️☔️☔️and let’s take this to the top #Phases OUT NOW !!! on alll streaming platforms 📸: @midjordan 🔥🔥🔥🔥🔥🔥🔥🔥🔥🔥🔥

"This a corny ass move on both y'all end," Meek typed under Tory's post.

So Melii explained that she ditched Meek because she realized he was just trying to smash. 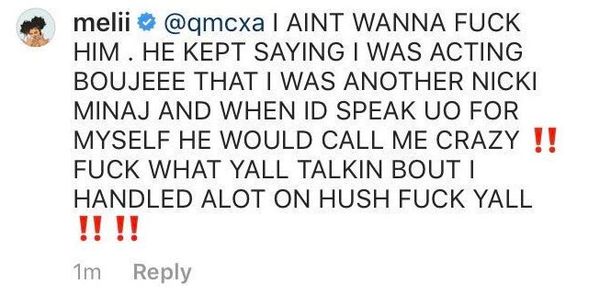 Oh uh. They're about to whip out that #SurvivingMeekMill hashtag:

You should also do surviving Meek mill since he out here emotionally abusing women!
Melii just exposed him! pic.twitter.com/ZnJR1oqPtx