Tekashi 6ix9ine has turned a notorious round of snitching into a $10 million record deal with 10K Projects.

Meek Mill's been a 6ix9ine critic ever since the troll rapper flipped.

The Philly spitter jumped on Twitter yesterday and cast doubt on the deal, calling it propaganda.

Meek might be onto something. It's entirely possible that 6ix9ine and 10K Projects are exaggerating the real worth of the deal -- which is apparently for one English and one Spanish language album -- to hype it up.

Meek wasn't the only person annoyed with the announcement. Snoop Dogg and Talib Kweli also ripped it: 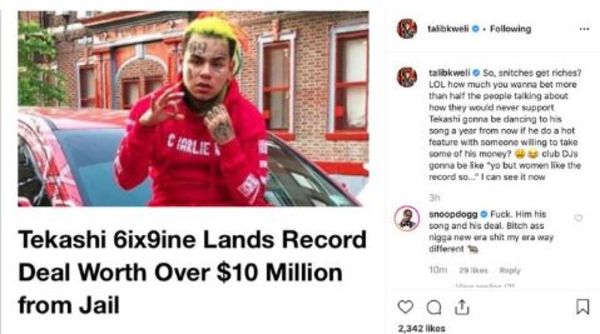 6ix9ine is expected to be released on December 18 and is already working on new music.

How's 6ix9ine's deal sitting with you?