Meek Mill Believes He Can Defeat The Algorithms

He's ditched Roc Nation for management and is trying his darndest to get out of his record deal with MMG and Atlantic.

He's also proposed a plan in which he'll raise money from his rich friends and flood the market with ten mixtapes. Although he's already missed the first date of that proposed plan, Meek continues to claim he is going to reinvent what it is to be a successful rapper.  According to Meek, that includes taking on the dreaded algorithms which determine what music gets played. 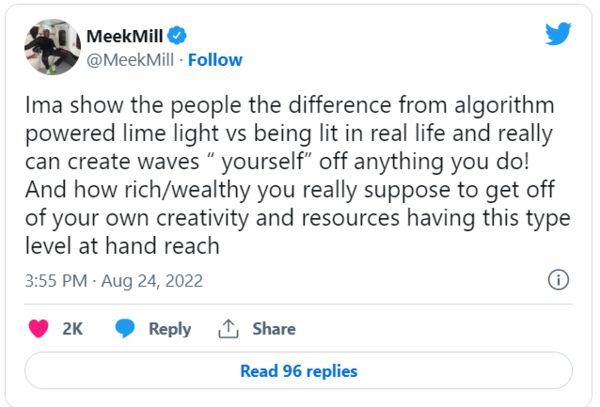 "Ima show the people the difference from algorithm powered lime light vs being lit in real life and really can create waves “ yourself” off anything you do! And how rich/wealthy you really suppose to get off of your own creativity and resources having this type level at hand reach," Meek typed.

Meek couldn't take down Drake.  Do you think he can defeat the algos?