Kodak Black's legal team is mounting a very aggressive defense against his recent charges of grand theft of a firearm, possession of a weapon by a felon, possession of marijuana, child neglect, and probation violations.

They've already requested that all the drugs and guns found in Black's home be dusted for prints, arguing they may not belong to the rapper.

Now they're questioning the entire raid that turned up the contraband.

While the police say they conducted the raid after an IG Live stream in which Kodak's 2-year-old child was near marijuana and guns, Black's attorney Bradford Cohen says law enforcement did not respond until five days later. He argues if they truly cared about the child they would have responded immediately.

"Why was the boy left out in the cold in nothing but a diaper while the house was tossed," Cohen wondered during an interview with The Blast.  “[The Child] was left on the porch in a diaper and T-shirt staring at his father while he was in handcuffs, and did not get pants or shoes until Kodak’s legal team showed up and demanded the child be taken care of.”

Cohen also questioned why the raid was conducted by Broward County’s gang unit, who came in with assault rifles and masks, rather than Kodak's probation officers, who had been scheduled for a visit on the same day.

Black will remain locked up until at least February 23, when he has a bond hearing. 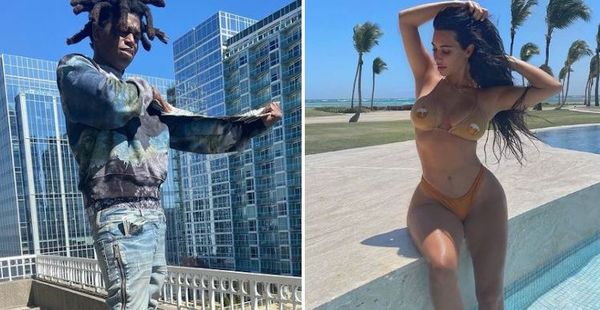 Kodak Black Is Aiming For Kim Kardashian 21 hours ago / News