Joyner Lucas is feeling a type of way about how Lollapollaza is promoting him for their 2022 show.  And he involved Machine Gun Kelly in his gripe. 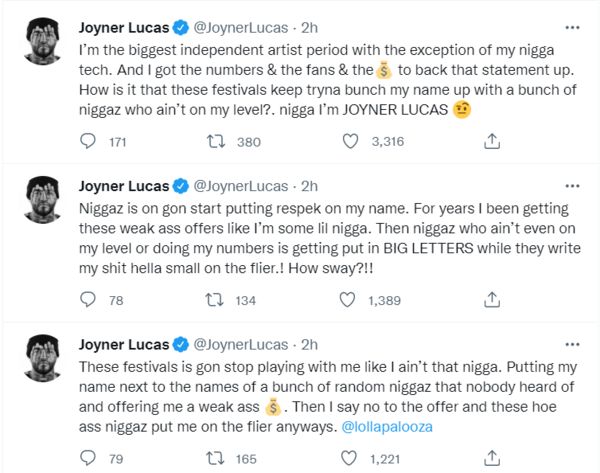 These festivals is gon stop playing with me like I ain’t that n*gga. Putting my name next to the names of a bunch of random n*ggaz that nobody heard of and offering me a weak ass 💰. Then I say no to the offer and these hoe ass n*ggaz put me on the flier anyways @lollapalooza," Lucas typed. "N*ggaz is on gon start putting respek on my name. For years I been getting these weak ass offers like I’m some lil n*gga. Then niggaz who ain’t even on my level or doing my numbers is getting put in BIG LETTERS while they write my shit hella small on the flier.! How sway?!! I’m the biggest independent artist period with the exception of my n*gga tech. And I got the numbers & the fans & the💰 to back that statement up. How is it that these festivals keep tryna bunch my name up with a bunch of n*ggaz who ain’t on my level?. n*gga I’m JOYNER LUCAS 🤨 All I know is @lollapalooza better take my f*kin name off that flier. I ain’t agree to that lineup and I don’t want that weak ass 💰 niggaz tried to give me. Next thing I kno the flier goes out and they gon put my name in some tiny ass letter like i ain’t me. F*ck outta here! 😡

Lucas was especially peeved that Machine Gun Kelly was headlining the Chicago show while he was in small print. 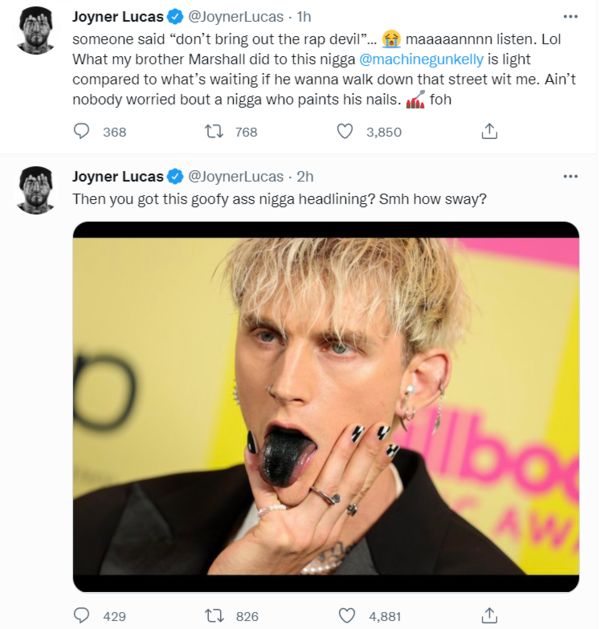 "someone said “don’t bring out the rap devil”… 😭 maaaaannnn listen. Lol What my brother Marshall did to this n*gga @machinegunkelly is light compared to what’s waiting if he wanna walk down that street wit me. Ain’t nobody worried bout a n*gga who paints his nails. 💅🏿 foh," Lucas typed after ripping Lollapollaza for letting MGK headline.

Is Lucas making a good point, or does he have an inflated view of himself?

The Game Trolls Eminem Through Hailie 6 days ago / Beef Beef