Jay Electronica is not happy with Wack 100.

During a chat with Nation of Islam member Ben X, Wack expressed his belief that the Nation are a bunch of scammers who take money but then never produce anything of value.  He was particularly annoyed with the 1995 Million Man March.

"The Million Man March came, a bunch of people donated.  And then we didn't see nothing," Wack said.

Ben posted a video of the conversation, and then explained that he wouldn't go into the gutter in his response to Wack.


But Electronica was more willing to get dirty, telling Wack to sit down and shut up.


"@ SCAREDTODEATHNEGRO @wack100 YOU SIT DOWN AND YOU SHUT YO WEAK KNEED BITCH ASS UP," he captioned a video of Louis Farrakhan saying the same thing. 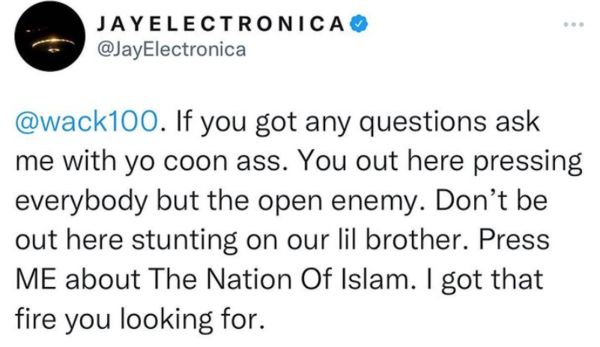 "@Wack100. If you got any questions ask me with yo coon ass.  You out here pressing everybody but the open enemy.  Don't be out here stunting on our lil brother.  Press ME about The Nation Of Islam.  I got that fire you are looking for," he added on Twitter.