But Kells, the day you put out a hit's the day Diddy admits
That he put the hit out that got Pac killed, ah 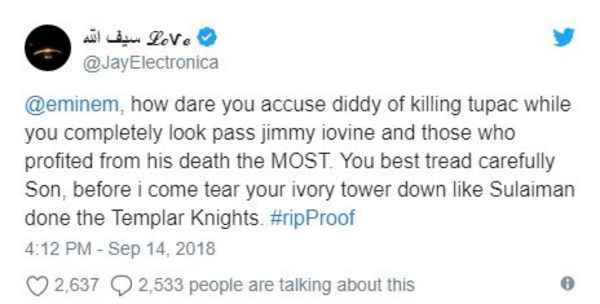 Right after Jay posted that, Em's boy Royce Da 5'9 tweeted this out:

I dare one of you niggas to write sum’n... Ima light yo ass up like a jack o lantern. Mind ya bizness

Others suggested Jay may have missed the point of the bars. (In "Killshot"'s outro, Em makes it clear he's not being serious about Puff killing Pac.)

Do you think Jay's shook or is he just building drama for when he finally drops something?