The relationship between Megan Thee Stallion and Carl Crawford, the founder of her label 1501 Certified Entertainment, has been in disarray for years.

Making matters more muddled is that Meg signed with Roc Nation for management, and Roc has been helping her get out of her deal with 1501.

Crawford has enlisted Houston OG J Prince in his fight against Meg and JAY-Z's outfit.  Prince fired off a shot in that battle last night. 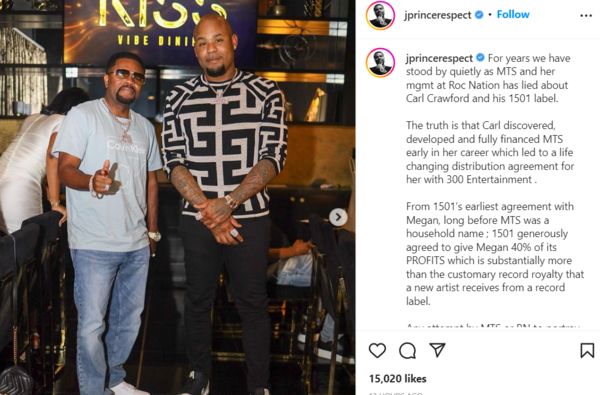 For years we have stood by quietly as MTS and her mgmt at Roc Nation has lied about Carl Crawford and his 1501 label.

The truth is that Carl discovered, developed and fully financed MTS early in her career which led to a life changing distribution agreement for her with 300 Entertainment .

From 1501’s earliest agreement with Megan, long before MTS was a household name ; 1501 generously agreed to give Megan 40% of its PROFITS which is substantially more than the customary record royalty that a new artist receives from a record label.

Any attempt by MTS or RN to portray a contract that provides a new unknown artist with 40% of the label’s PROFITS as unconscionable or unfair is blatantly false and contrary to the customs or norms in the music industry.

In fact, we have seen several RN contracts and RN pays its new artists a customary royalty that is significantly less than the 40% of PROFITS that 1501 agreed to pay Megan.

In addition MTS has consistently and intentionally breached her 1501 contract with impunity for years in ways that are too numerous to list here - from entering into agreements inconsistent with her contract , falsely claiming publishing shares that belong to 1501 - failing to notify, account or pay ancillary revenue; releasing albums of outtakes and previously released material and falsely claiming that she is out of her contract-
and now falsely alleging that 1501 leaked her album when the album was always intended by Megan to be released on 8/19 and where the leak actually hurt 1501 as much , if not more than Megan, rendering her claim to be specious and nonsensical," Crawford typed

Young Scooter Gets At N.O.R.E. For Saying Future Is Mad At Drake a week ago / Beef