Chris Tucker quit the Friday franchise that help make him famous before it became a franchise.

Earlier this year, he explained he left after the first movie because he didn't want to be associated with drug use.

"One of the reasons why I didn't do the second one was because of the weed.  Because I was like, 'man that movie became a phenomenon, I don't really want everyone smoking weed.  I never really told anyone this, because I forget about it, but it was one of the reasons I didn't do it because I don't want to represent everyone smoking weed.  That kinda made it more personal than a movie," he said.

Ice Cube pushed back on that on Twitter, explaining to a follower exactly how much he offered Tucker to reprise his role as Smokey in Next Friday. 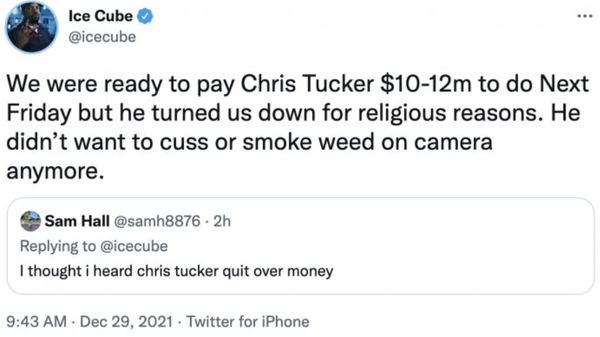 "We were ready to pay Chris Tucker $10-12m to do Next Friday but he turned us down for religious reasons. He didn’t want to cuss or smoke weed on camera anymore,"Ice typed.

Tucker has said he only got 10K for the original movie.