Days after 50 Cent posted about how he had bought himself a $3 million 2020 Bugatti Chiron for Christmas, French Montana posted that he had also bought himself a "new Bugatti" for the holidays.

French also claimed he was the first in New York to have the supercar and declared himself the illest in the city.

FRESH OUT OF ICU WOKE UP IN THAT NEW BUGGATTI!!! LIL GIFT TO MYSELF! FEEL LIKE A BOSS MOVE LIKE A BOSS AND TASTE LIKE A BOSS lol #nipseyblue💙💙💙 MOTIVATION USE ONLY 🗽 ALLAH AKBAR ❤️ RIDING WITH TOILET PAPER FOE THE SUCKERS

That obviously caught Fif's attention, and the notorious Instagram troll posted that French's Bugatti was in fact a used 2010 Veyron model.

I’m in the hospital so sick of n!ggas, 😆that’s a 2010 Veyron man, 👀you shoulda just got the Uber app on ya phone 🤦‍♂️it’s 2020 Chiron Man hahaha Put that bullshit back on that truck. #lecheminduroi #bransoncognac #starzgettheapp #abcforlife


In French's clapback he didn't deny it was an older model, instead claiming it was good as new and dismissing Fif as a suburban soccer dad. 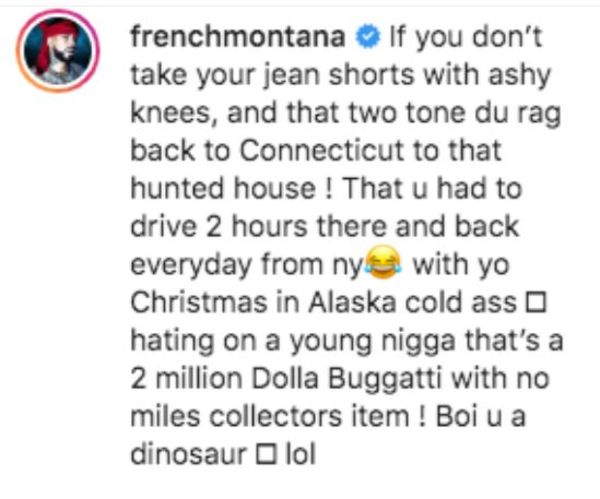 "If you don't take your jean shorts with ashy knees, and that two tone du rag back to Connecticut to that hunted house," French typed. "Hating on a young n*gga that's a 2 million dolla Buggatti with no miles collectors item! Boi u a dinosaur."

What you think about French denying Fif NYC status?

Kidd Kidd Explains What Wrong With Him And Lil Wayne During "Mrs. Officer" 5 days ago / Beef