Drake Confirms That He Had Some Legal Drama With Swedish Police

Last week there was a lot of talk that Drake was arrested in Sweden on marijuana charges.

His team denied it, but according to the rapper, it does look like he had some sort of run-in with authorities there.

On Sunday, Drake posted a document on Instagram titled "Information for Those Suspected of a Crime and Subsequently Detained," which lays out one's right after being arrested. 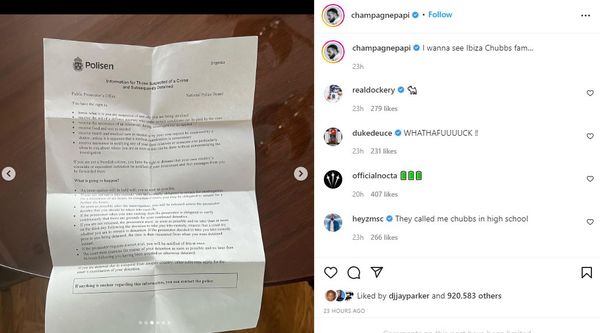 Drizzy didn't actually say that he was busted for anything, but the post is telling. For the record, weed isn't only illegal in Sweden, it's frowed upon socially and one can spend a lot of time behind bars for just smoking a joint.

So, if Drake was puffing on something in Sweden and was able to walk away, he's more than lucky.