Boosie Badazz made it clear he doesn't think it's right that Dwayne Wade supports his 12-year old's transition from a boy named Zion to a girl name Zaya.

Now one of Boosie's sons, Tootie Raww, is weighing in on the controversy, blasting both Dwyane and Zaya and threatening to make Zaya straight. 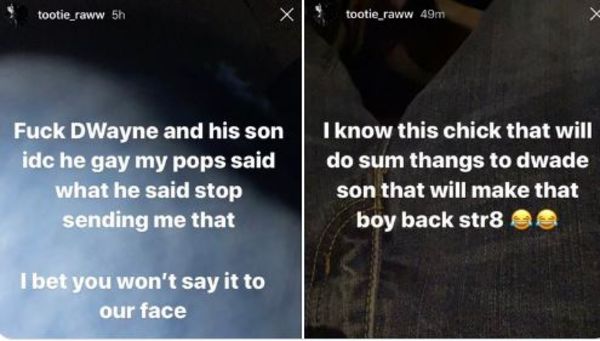 "F*ck Dwayne and his son, idc he gay," the 16-year-old typed on Instagram story. "My pops said what he said. Stop sendin gme that. I bet you won't say it to our face. I know this chick that will do sum thangs to DWade son that will make that boy back str8."

This is the same son that Boosie had promised "a bad bitch to give u some head" for his 14 birthday, so Tootie may well know that kind of chick.

Here's Boosie's anti-Wade rant that got everyone going, and got Boosie banned from Planet Fitness.