Boosie Badazz Gets Emotional In Ugly Exchange With Webbie

Earlier this year, Webbie implied that money had changed his Baton Rouge bro Boosie Badazz and that's why they no longer collaborate.

Boosie deflected talk of beef.  But that facade came crashing down tonight after Webbie said he had helped Boosie's family out when Boosie was locked up. 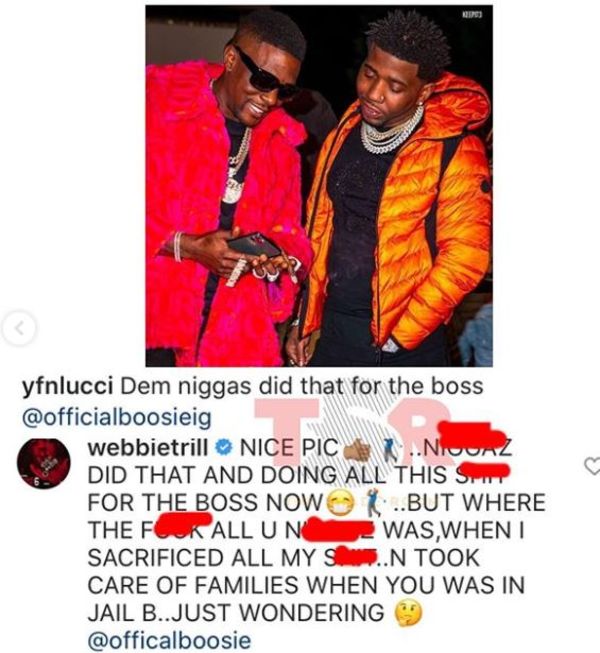 "But where the f*ck all u n*ggas was when I sacrificed all my sh*t N took care of families when you was in Jail B .. Just wondering," Webbie typed under a photo of Boosie, tagging Boosie

Upon reading that, Boosie went off on Webbie.

"U coulda call me nigga smh,” he began. “smh truth is you NEVER sent my mother a ‘dollar’ n y’all had FREE BOOSIE concerts all over SHE NEVA GOT A DIME SMH you lyin bra @wakaflocka @yogotti @jeezy HIT HER WITH STACKS WHY NOT YOU. Everybody know I’ve tried to help you millions of times. Every time we’ve tried to get you n the studio u leave. Trill even tried gettin writers for you out bra. 2 years ago U wouldn’t even clear tootie song saying you made the title ‘ITS UP’ really. U was down gettin 7k a show. I put you on my tour and gave you 10k for 7 shows out my pocket so you be straight bra. N WHAT U DO tried to sank the whole tour missing dates not doing radio etc. telling the DJ you only doin 3 songs. ive tried to get you features u refuse 7500 over n over again n that’ more than your show price. U want me to be like hate for all the artist n da game n that’s fake. The rap industry that u think hate u actually have respect for u nigga. U THE ONE TO BLAME FOR YOUR DOWNFALL. I CANT MAKE U RAP N I CANT MAKE U HUSTLE. IT GOTA BE BORN N YA. BUT FOR YOU TO SAY YOU TOOK CARE OF MY FAMILY THAT’S A BOLD FACE LIE [100 percent],” he added. “U SCREAMED MY NAME BUT YOU ‘NEVER’ GAVE MS CONNIE NOTHING BRA, NEVER PUT NOTHIN ON MY BOOKS, U NEVER WROTE ME A LETTER, U NEVER TRIED TO COME VISIT ME N U AINT EVEN A FELON SMH.SLL I COME HOME TRYING TO HELP YOU. U BLAME EVERYBODY WHEN ITS U. shakeback @webbie I’m go PRAY FOR YOU NIGGA. The truth has been spoken.”

Between this and Boosie admitting he hooked all of his sons and nephews up with grown woman top when they were 12, Boosie's on a role.  He has a new reality show coming.  Do you think this his Webbie rant is promo or genuine feelings?

T.I. Keeps Explaining Why He Can't Go Against Busta Rhymes a week ago / Beef Beef

Funk Flex Goes Off On "Clown" Snitch T.I. a day ago / Beef News