Big Sean delivered his Nipsey Hussle assisted-single "Deep Reverence" a couple of days ago, ahead of his album Detroit 2, which drops on September 4.

Sean said that his record label didn't want him to release the song, while also explaining why he did it anyway. He deleted the messages afterward. 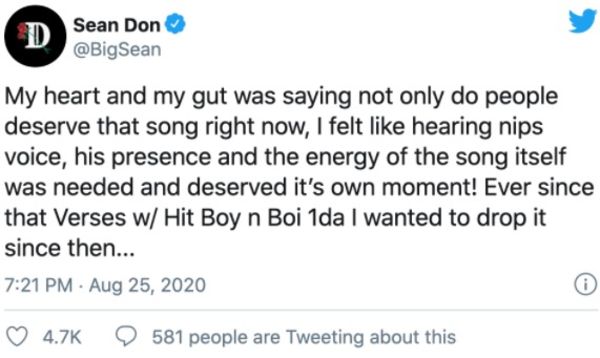 "My label ( a few people there, not the whole label) thought it wasn't smart to put this song out ahead of hte my album, they told my team I should hold on to it ... they still supported my decision in the end tho," Sean typed. "My heart and my gut was saying not only do people deserve that song right now, I felt like hearing nips voice, his presence and the energy of the song itself was needed and deserved it's own moment! Ever since that Verses w/ Hit Boy n Boi 1da I wanted to drop it since then ..."

How are you feeling "Deep Reverence?"