Daylyt is known for his antics on the battle rap circuit. But the Watts-based MC's behavior during the "Duel In The Desert" in Phoenix this weekend was just too much to take, and he was ejected from the event.

During Daylyt's match up against Real Deal the crowd was getting on him for what they perceived as a weak performance.

"If I hear two more boos, Ima boo boo on stage," Daylyt warned the crowd.  Then he dropped trou and attempted to squeeze a couple out. This cleared the stage of the other contestants, but before Daylyt was able to make a like a dog on the sidewalk he was grabbed by the venue's security guards and escorted out.

The crowd should have sensed something was up before Daylyt tried to go number two. He had entered the stage wearing a black cloak over his head, and used that as a prop to simulate his own beheading, because, as he said, fans had expected Real Deal to "take [his] head off."

After his Alice Cooper-like antics didn't get the desired effect from the crowd, he sunk to the lowest depths of potty humor and tried to use the stage as his giant toilet.

Here is a photo, which we spared you from posting atop: 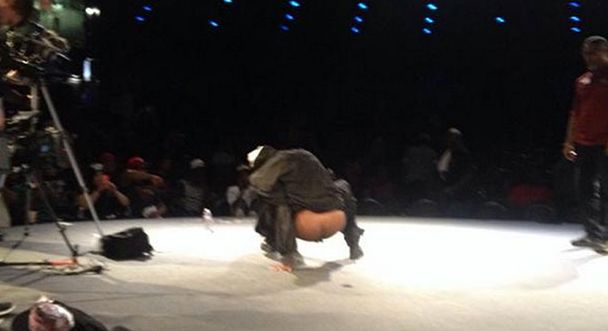 See a video of his gross act and ejection below.

Security pulling @daylyt2k14 off this stage before he could shit. He'll get it someday.

DJ Akademiks Takes Shots At Rory From Joe Budden Podcast; Mocks Him For Pulling Up 5 days ago / News News