Tom Brady was seemingly Antonio Brown's biggest champion, pushing the Bucs to take a chance on the troubled WR and then winning a title with him at Super Bowl LV.

However, AB doesn't see it that way. Last season he said this about Brady:

"If Tom Brady is my boy why am I playing for an earnest salary?  You my boy, right? Gronkowski is his boy, right?  How much did he get paid?  So why is AB on a prove-it deal?  Who's better than me over there.  Let's be real.  Let's be honest.  Who's the best guy receiver-wise?"

He took things next-level this afternoon by posting a photo in which he's embracing Brady's famous wife Gisele Bundchen after the Super Bowl winning and adding a disrespectful caption. 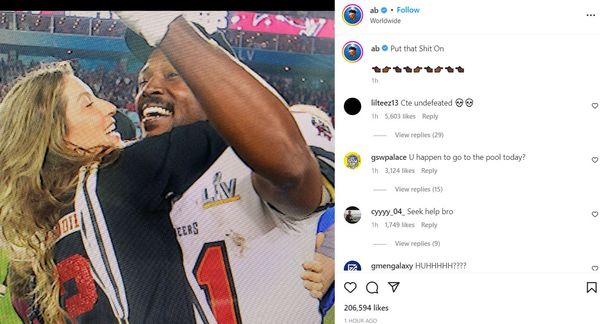 Without an Antonio Brown CTE translator, we aren't quite sure what that means.  But it doesn't sound good, especially at a time Tom and Gisele are having martial problems and AB is in the news for taking off his bathing suit and thrusting his ass in a woman's face.