“Mari alleges that this post was designed to publicly humiliate her after she had broken up with him,” Bloom said in a statement. "50 Cent, who appears to be a close friend of Mr. Abdul-Ahad, immediately reposted one of the explicit images to his 18 million followers, with the caption, ‘get the strap.'”

50 doesn't seem to be sweating the charges. In fact, he trolled Bloom with a photo of her mom, the more famous attorney (and friend of 50) Gloria Allred. 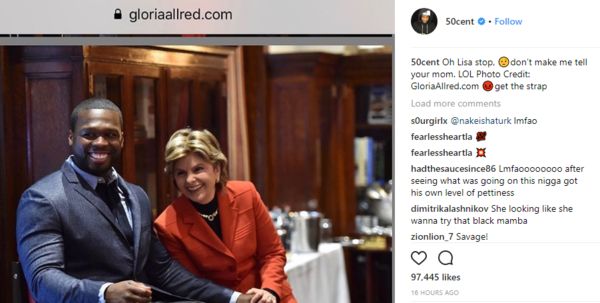 Do you think Bloom's case against 50 will go anywhere?

l have a unscripted show idea Thats gonna blow you away, now that I’m being pulled into a reality show’s story line. LOL🤨get the strap

LOL 😆 Mona like yeah we got the Lawyer on love in hip hop, film this shit. 😆🤨 get the strap